The big world of beef proteins is scary. Cow? Chocolate? Drinkable? It doesn’t make sense yet it’s intriguing at the same time.

Skinny Yoked investigates the beef protein trend in 2023 and compares some of the biggest sellers to help you make informed decisions.

Nothing get’s a man’s pulse quickening then the phrase “chocolate beef protein shake”.. or at least we get excited by the prospect of drinking our favorite meat.

There are many cases to be made in diversity and bioavailbility of nutrients in supplements, one of the reasons protein blends like Syntha-6 and Pro Jym are so popular.

Whey protein digests at a fairly rapid rate. The idea behind blends that include whey concentrate, whey isolate, egg white and micellar casein are that these different types of proteins all digest in different ways at different rates, thus prolonging MPS (muscle protein synthesis).

While egg/casein/whey combinations have been on the market for a while, a relatively newcomer has entered the scene and is making waves. Say hello to beef protein.

Being a relatively new source of protein there aren’t that many makers. One of the most popular is Musclemeds Carnivor.

Another big brand to launch a line featuring protein is Musclepharm with their Iron Mass, which we did a long term review of here.

Still, there’s been a ton of speculation about the quality of these new beef proteins, as some have been found to be of less-than-desirable quality.

One brand that is completely transparent in the composition of their beef protein, and which has earned our enormous respect in doing so is Betancourt Nutrition with their Beef Standard protein powder. 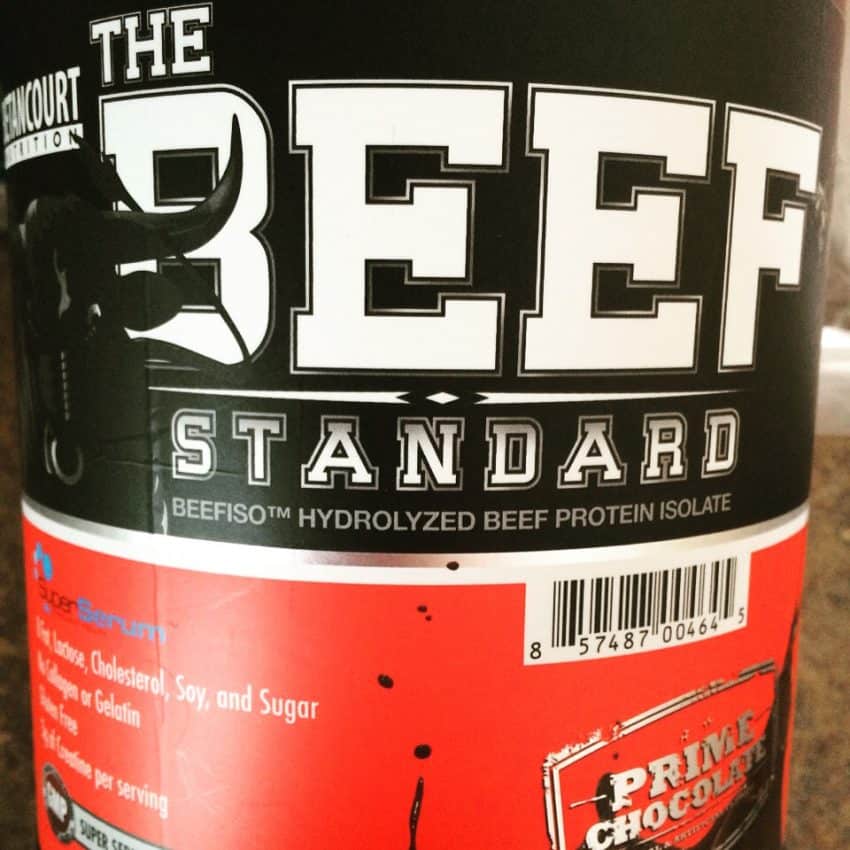 Can’t go wrong with “Prime Chocolate”. We weren’t big fans of the vanilla. When in doubt, always go the chocolate route!

So First Off, Who are Betancourt Nutrition?

When the founders this jacked, they probably know what they’re doing

This mindset has led Betancourt to produce some top quality products, and the best pure beef protein powder on the market.

We reviewed Betancourt’s B-Nox before, an absolute powerhouse pre-workout that is actually a pre-workout AND testosterone booster all in one. For example, while Musclemed’s Carnivor is probably the most famous beef isolate protein on the market, it’s largely due to having Kai Greene as a (former) brand representative than it is the actual quality of the product.

Kai has since gone on to found his own supplement line, Dynamik Muscle, which has plenty of rad pre-workouts and intra-workouts, but no beef protein mix, just whey

Musclemed’s Carnivor is full of all kinds of proprietary named ingredients that are more for marketing than educating consumers.

For example, reading the following excerpt leaves us more confused than it does excited about the product:

ANRT is a major muscle building breakthrough in protein supplementation.

While protein is critical for muscle growth, it can sometimes actually decrease performance and muscle growth if nitrogenous waste products like ammonia are not recycled back into anabolic tissue building pathways or otherwise neutralized.

ANRT is specially designed to allow the recycling of aminos back toward the muscle building pathway and prevent the build-up of debilitating toxins such as ammonia.

What does that even mean?

While Musclemeds goes on at quite length about the science behind Carnivor, how much creatine it has and how hydrolization is so much better than concentrate, they don’t ever specify what type of beef is used in Carnivor. 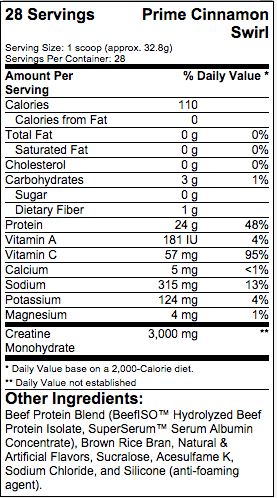 And that’s a problem. When companies fail to fully disclose what’s used it’s usually for a good reason.

Competitors like True Protein and Universals 100% Beef Amino’s both have glycine and proline which suggests that while they are technically “beef” they are also likely composed not of the good red meat but instead gelatin or collagen from connective tissue and bones.

Why would beef protein makers use gelatin & collagen instead of real meat? Because it’s much much cheaper.

There are plenty of places to get cheap beef scraps, because they aren’t that popular with consumers. Grilled beef tendons anyone?

Now just because they don’t say what type of beef they use DOESN’T necessarily mean that they are using hooves and intestines, but if they are using only 100% real meat, then they’re marketing team needs to be fired and replaced with people who know how to shout about a good thing!

Innocent until proven guilty, so maybe Carnivor really is an exceptional product, but we still have to say “maybe” whereas with The Beef Standard we KNOW beyond a doubt it’s a solid product.

Betancourt hasn’t been shouting, but they have been very transparent in their marketing and deserve credit for that.

What Makes “The Beef Standard” So Dope?

If you haven’t heard of Betancourt, they’re pretty legit. All of their products are. B-Nox Androrush, their pre-workout is loaded with all the good stuff like Tuarine+Carnosyn, 3 forms of creatine, L-Tyrosine, L-Arginine, and a full BCAA profile. Additionally they stand out by adding some other dope ingredients like ZMA, Beet Root, Q10 and Bioperine.

SY has used both B-Nox Androrush (Read our full review here) and The Beef Standard for more than a year and have fallen in love.

How Does It Stack up Against Muscletech’s 100% Beef, Carnivor or Olympian Labs?

Another great beef protein actually comes from Muscletech, who are also surprisingly forthcoming about the fact that their beef protein also contains zero collagen or gelatin.

Both Muscletech’s Platinum 100% Beef and Betancourt’s Beef Standard share servings size, brown rice for the filler and 3 grams of creatine.

However, we think Beef Standard has a slight edge over Muscletech here simply because they regularly come in at about $4 cheaper AND have their trademarked Superserum, which is a

Bovine Serum Albumin Concentrate protein rich in peptides and growth factors. It is a fast absorbing protein with a minimum of 10%  IgG (immunoglobulin- a protein used by the immune system) , 60% Albumin and 5% Transferrin.

Olympian Labs also touts the benefits of Transferrins in their “Muscle Plasma Protein Technology” which, while still not fully tested, is supported by research indicating the benefit of such transferrins in maintaining a healthy gastrointestinal lining and thus increasing the absorption of amino acids, fats and carbs.

Pretty delicious and nice carb profile we must admit..

Table could not be displayed.

So, in the world of beef proteins there are 3 solid candidates to choose from:

*Bonus Tip: Mix Whey Protein With Beef Protein for a Double-Tap (a.k.a the ultimate protein stack)

If you’re still skeptical about the benefits of beef proteins as there isn’t nearly as much research on the long term benefits compared to whey, then consider buying both a quality whey or whey-blend protein AND a quality beef protein and mixing them for added bioavailability and stacked absorption rates.

Mix with 2% milk (to really pack on them gaaaaaaains)

(Pop it in the freezer 15 minutes before the gym to get it all cooled down and ready for you to slam post-workout.)

With these blends you’re either getting every possible protein source under the sun in the case of the Syntha-6 + Beef Standard blend or ultimate reliability and glutamine supplementation with the O.N Gold Standard + Beef Standard (we’re daring to call this the “double standard”) blend. 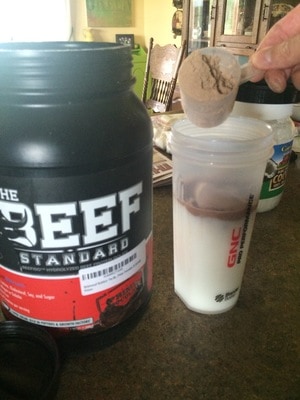 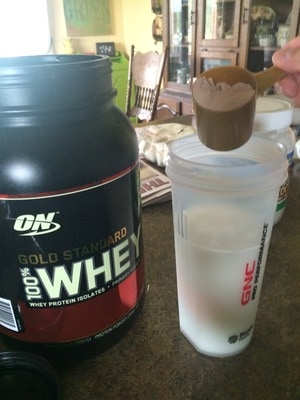 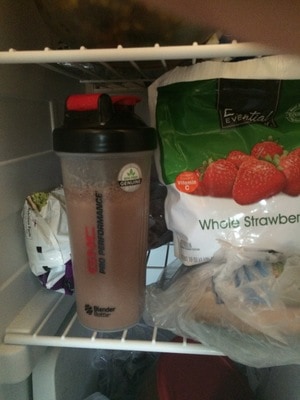 However you do it, we think beef is here to stay, it’s a great lean protein source when done correctly and has the added benefit of including a bunch of naturally occurring creatine.

There are tons of great beef protein options out there. Obviously, given the topic of this review, we’re in love with Beef Standard.

However as mentioned Muscletech makes a respectable product as well. We’re optimistic about Carnivor, mostly because we’re in love with Kai.

Why not check out a beef protein? You can order a small 2 pound tester and see how you like it.

Try it straight, try with milk, try with whey… you may find a great new way to incorporate high bioavailability protein and creatine supplementation all in one.. which is why we love the beef so much. 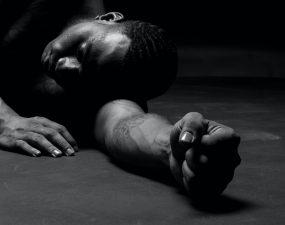 Most of us love a good workout, but it takes a special type to enjoy the aches and pains that … 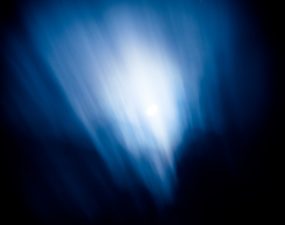 Top 5 Supplements for Recovery and Sleep

There’s an old adage that stresses fitness is 80 percent diet and 20 percent exercise, and while that equals 100 … 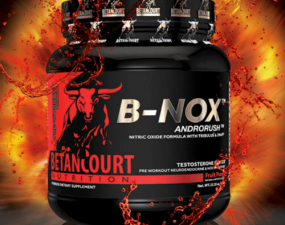 There’s no need to get into why so many supplement reviews suck. Everyone knows they’re not real, the person writing … 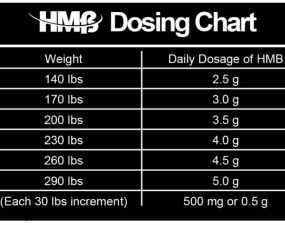 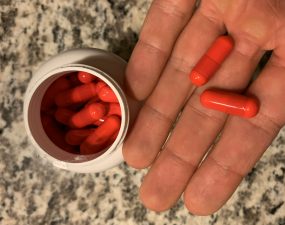 Sometimes, even if you’re working out 7 days a week, seeing results can take a while (read exceptionally long to … 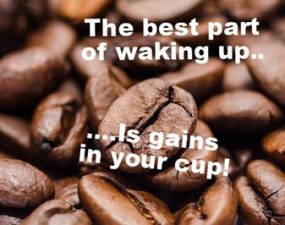