Kai Greene has a habit of dropping bombs. First and most memorably was not competing in the last Olympia.

Later on was abrupt leaving of MuscleMeds to the launch of his own supplement company, which while not a complete surprise, certainly developed quickly without much pre-lunch fanfare.

Now, once again, Kai Greene surprises everyone with the sudden launch of his “5P’s Program”.

The 5P’s here stand for “Proper Preparation Prevents Poor Performance”. Got it? Good. This slightly cheesy, albeit logical acronym is the tagline for Kai Greene’s new training and diet coaching program.

From Kai Greene himself quoted on the5P.com:

“Over the years, we have gained vast notoriety beyond what was imagined from the outset of this journey. This success is derived from an unwavering desire to build a structure around our goals so that there is no option but to remain in a constructive mindset and ultimately reach certain milestones and checkpoints. We call it The 5P. Proper Preparation Prevents Poor Performance. This is how we have achieved what few have, and how you can achieve what many won’t.

So What Exactly IS the 5P?

The 5P is just a diet and training program with Kai Greene’s personal branding.

You can purchase a 4, 8 or 12 week plan. Each plan comes in two parts, first is the Nutrient Plan and second is the Training Program.

You can also purchase just the Nutrient Plan (although we have no idea why you’d do that) or both the Nutrient Plan and Training Program together (the logical choice if you’re looking to imitate Kai as much as possible). 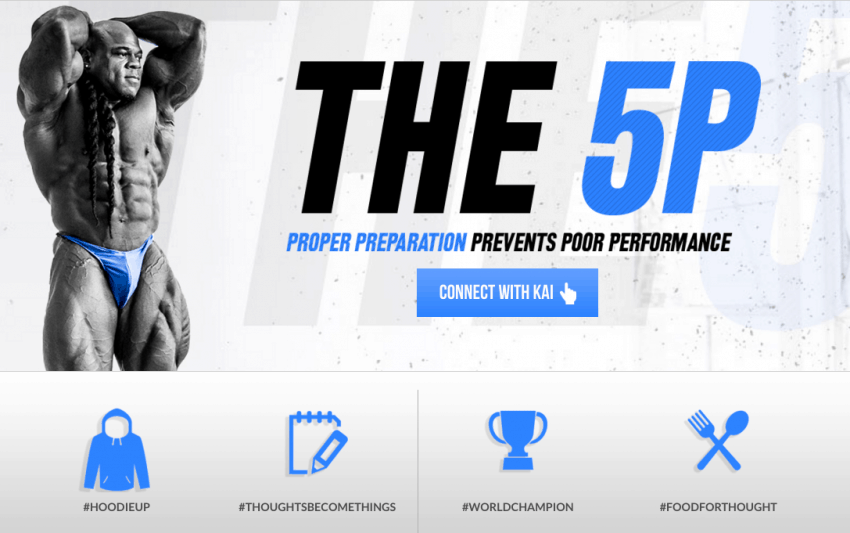 Hate it or love it, Kai has always been known as an exceptional teacher, from the before his in-depth (and under marketed in this writers opinion) “Train with Kai” videos sponsored by MuscleMeds, so it only makes sense he looks to capitalize financially on that skill.

We still don’t know how much of the training is coming directly from Kai, or if this is just some business scheme that payed to use his name. The quality of the website would seem to indicate the later.

The website is just downright confusing. The icons just below the hero image all state one thing but simply link to his social media channels. For example icon “#HOODIEUP” with a hoodie icon just links to the Dynamik Muscle homepage.

There are no hoodies on that page whatsoever, you have to navigate to the apparel page via the menu.

The icon #THOUGHTSBECOMETHINGS has a notepad and pencil, and we were hoping it linked to a blog or perhaps Kai’s own writings however it just links to Instagram.

The second oddity of the site is the lack of information regarding the Nutrient Plans. They are displayed in an organized enough way, but don’t provide much in the way of detail at all, let alone a preview of what you’re paying for.

Do people get to talk to Kai? Exclusive videos? Do the plans include gear dosages and cycles? Lots of questions go unanswered..leaving us.. anxious. 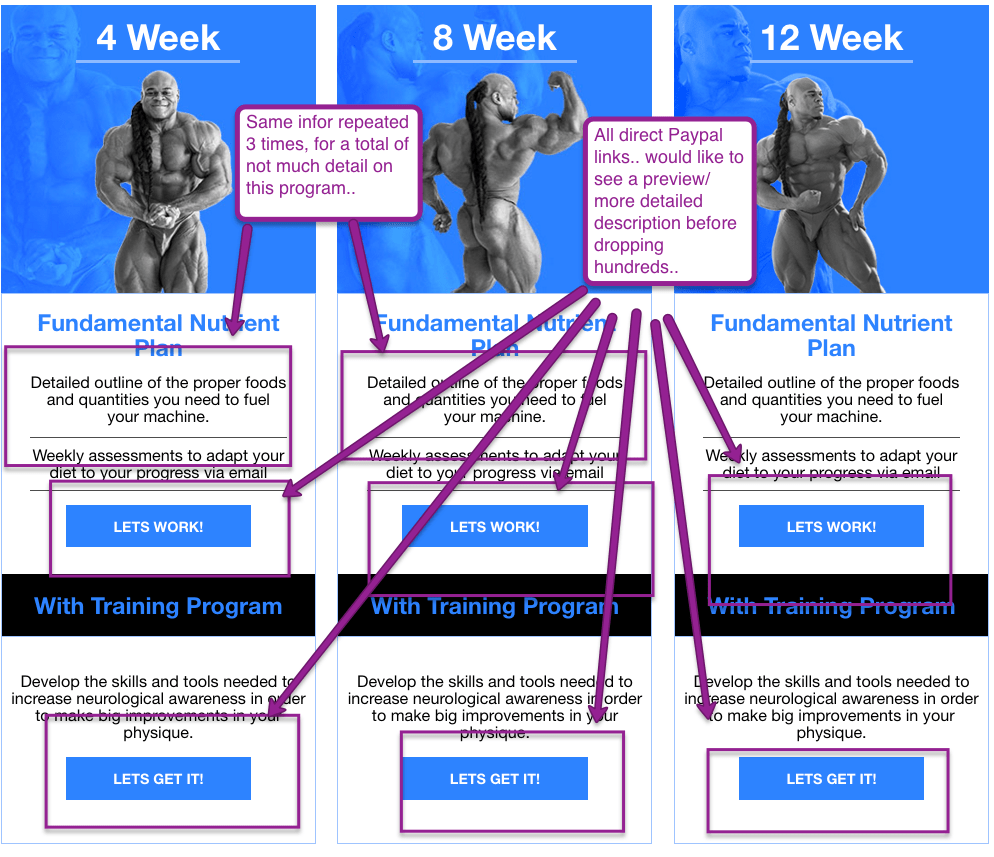 It’s a risky marketing strategy, it says Kai and his team are banking off people dropping money based on his reputation alone.

While Kai does have an insanely awesome reputation, it’s a big leap for users, given the lack of info on the plans, and clicking on “Let’s Get It!” simply brings you directly to Paypal, not the most trustworthy instilling payment gateway.

We may be judging the site too harshly, after all as of the publishing of this article it’s only a few days old, perhaps more detail will come and new links will be added.

For those of you who just can’t wait and want your hands on Kai’s diet and training programs NOW, here are the prices for the 4, 8 and 12 week programs:

Yeah, don’t feel bad, it’s way out of our budget too. Don’t feel mad either though, professional level bodybuilding training will cost you thousands of dollars a month.

The big questions we want to know is how much Kai is involved in this, if it’s a “hands on” deal or a “hands off” deal. This will probably determine whether the perceived value is considered “fair” by fans or “a rip off”.

We reached out to Kai and The 5P team and asked if they could provide anymore insight to the program. We’ll also keep our ears to the ground for first-hand reviews on forums and social media.

Overall we are really optimistic and excited at this, as we’ve always seen Kai as the leading teacher amongst the global elite, the man has a keen ability to connect with the people he trains with and impart some truly valuable wisdom that only a man who’s spent most of his adult life honing his technique/art can impart.

Check out Kai’s “The 5P” program at his official 5P website here.  And just in case you’re wondering, we figured out who makes those cool looking red shoe’s he’s always wearing and wrote an aggregate review of them as well.

They ain’t cheap but they’re cheaper than the training programs so if you really want to pretend to be Kai, at least you can dress the part even if you have no idea what you’re doing 😉

We want to hear from you. Are you excited about the 5P’s? Did you buy it? Is it the most awesome thing in the world? We are dying to know! 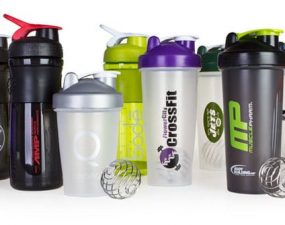 SY recommends The Way U Do (RL Grime Remix) for your post-workout dopamine dump playlist. Check it out and share … 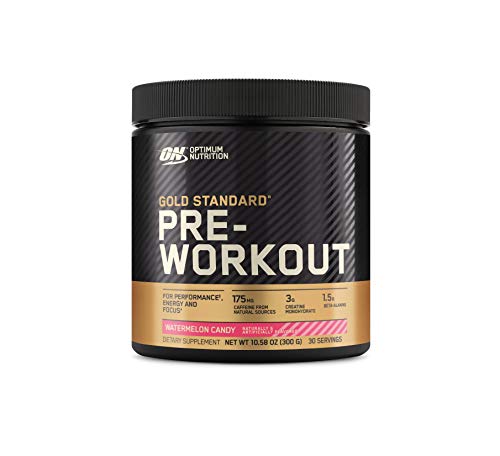 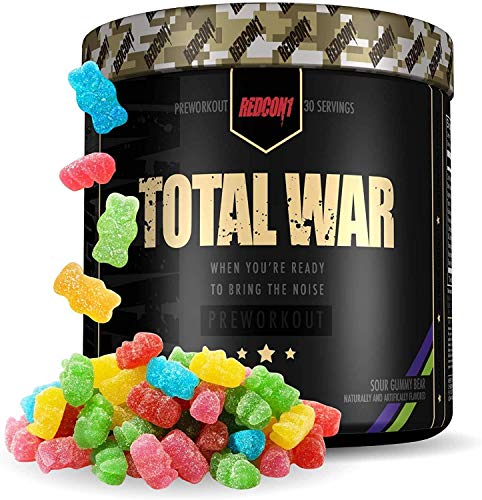 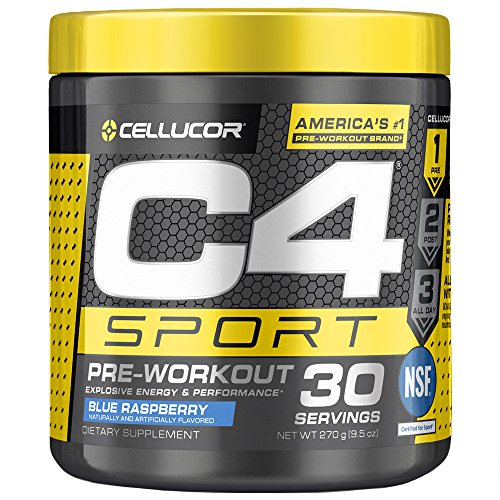